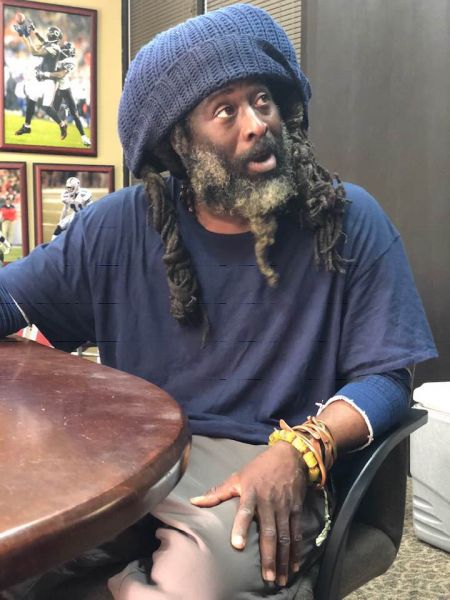 To all my friends,

As you may know through several posts on social media, I recently met a new friend named Travis. Here's a little background on how we met...

About 2 weeks ago, I stopped to eat lunch and noticed a homeless man was sitting outside, near the restaurant. As I passed by, he asked me if I could give him some money. I told him that I'd catch him on the way out. As soon as I sat down to eat, I became under conviction. I got back up and walked outside and asked this gentleman if he would have lunch with me as I was by myself and wanted some company. He looked surprised and said yes, and told me that he hadn't been inside a restaurant in over 6 years. He grabbed all his earthly belongings that were in two bags and came inside The Olive Garden and sat down.

I asked him to share his story, and he started out telling me that he grew up in Columbia, S.C. and loved sports as a kid, he really liked Former Heisman Trophy Winner, George Rodgers from USC who just happened to have played his High School football in the county that we were having lunch in. He was very articulate and had a beautiful smile; he had served in the Coast Guard and was an artist. As he continued to share his story with me, I realized how much humans need each other; we all have the same wants, desires, and needs. After about an hour, I had to encourage him to eat some of the mountains of food that I had ordered for him. He continued to share his story, and after about an hour and a half, I had to leave for another meeting. I reached in my pocket and pulled out all the cash that I had and handed it to him. Standing in the lobby, Travis gave me a hug and the hostess had tears in her eyes and thanked me.

Many times through each passing day, I couldn't stop thinking about my friend, Travis. Feeling convicted again, I drove to the last area I saw him, asked around, and ultimately found my friend again. This time I wanted to do more so I put him up in the local InTown Suites so he would be able to have a place to lay his head and also clean up.

Fast forward to Thursday of last week, I stopped by the InTown Suites to pick up Travis. As I walked into the lobby, the manager came out and told me that I needed to check him out of the hotel. I asked if he had misbehaved, and she that he hadn't but, "he smells really bad." I was disappointed and told her she should be ashamed. I put him in up in another hotel afterwards.

Later that day, Travis and I went to our training facility, and as we were walking through, I pointed out a photo of NFL HOF great, Brian Urlacher, Travis said, "you want me to paint that photo"? I was halfway kidding, and said yes, can you? Well, it's been about a week and a half, and yesterday he finished this

painting of Brian. I will be making prints on canvas that Brian has agreed to sign numbering from 1-54, 54 being the number of his jersey. If you want to order one before they are up for auction, Brian will personalize it for you, with all the proceeds going to Travis.

We still need art supplies, and I need help with housing. For now, I need some donations to continue paying for housing, food and keeping him at a local extended stay hotel so I can pick him up daily. I have a room at my facility that we have set up so he can paint. My coaches and athletes continue to stop in and love on him, and I'm amazed at how many people have reached out to me to offer help. A donation of any size really helps. Boostmeup isn't charging any fee for us to run this campaign. If you want to donate by check please send to:

I appreciate any help that you see fit to contribute. If you don't mind, please share this post, I have 5000 friends on facebook, and I need this shared by everybody! I need for as many people as possible to read about Travis and see his talent!

I was in the audience yesterday and heard the story of Travis. I believe you have touched not only Travis but all of us who heard how you can make someones life better. I am committed to the cause of spreading Joy and responding to the divine appointment when it comes. Thank you for caring.
$ 1,000.00